It’s not motivation you want, it’s habits. The quality of our lives equals the quality of the habits, routines, or rituals, whatever word you want to use, that we have.

What is a habit?

Let’s have a look at this diagram.

With a habit, you can see that there is a cue, a trigger that tells our brain to go into automatic mode. A cue can be internal – such as a feeling or thought; external – such as a time of day or being around certain people. All these things are cues or triggers. As soon as we are around that environment, context or in that time, then there’s a routine that’s performed. This is the behaviour that leads to the reward.The routine can be physical – like eating a chocolate. It could be cognitive – you can actually remember a test or emotional – I feel anxious in a Math test.

The second part is the reward. Not surprisingly, the reward can be physical – like a sugar craving, cognitive – gets us interested in something or again emotional – I always feel relaxed in front of the TV. The reward determines if a particular habit loop is worth remembering. When a habit emerges and our brains say,  “Yes, this is worth remembering and has a really cool reward,” it goes into automatic mode. It gets stored in the part of the brain called the “Basal Ganglia.” This can be good or bad.

When a habit emerges, the brain stops fully participating in the decision-making because that’s the nature of a habit, it’s automatic.

It stops working so hard and diverts focus to other things or tasks. That’s why rather than fighting the old habit, research is saying that it’s very difficult to change.

We need to start creating what’s called Keystone habits. These are positive habits – such as eating the right food, exercising, setting good, clear and concise goals; focusing on one task at a time and working on the most important or difficult task when we’re at our most energetic and when our self-control is at its strongest. It’s not about feeling motivated. It’s about setting-up consistent routines that create these positive habits that will just unfold automatically.In the mornings now, I go for a walk. This has been happening for about 5 years. In the summertime, I go to this little outdoor gym not far from my place and then I come back home and have a swim. It’s a cool routine. I know that when I do this, regardless of wherever I am or whether I’m traveling around Australia presenting my Accidental Counsellor Training, I need to make sure that I’m out and I go for a minimum of  a half-hour walk but usually I do an exercise routine for 50 minutes to an hour. I end much better for the rest of the day.Often times, I would have people say to me, “I don’t know how you can get motivated to get up, go and do what you do in the mornings; your exercise routine.” I was thinking about this and I thought, “Actually I don’t really feel motivated to go either, but it’s become automatic.” This is what I mean by creating these good habits.

Let’s go through this diagram that can help us with a habit that we want to create. 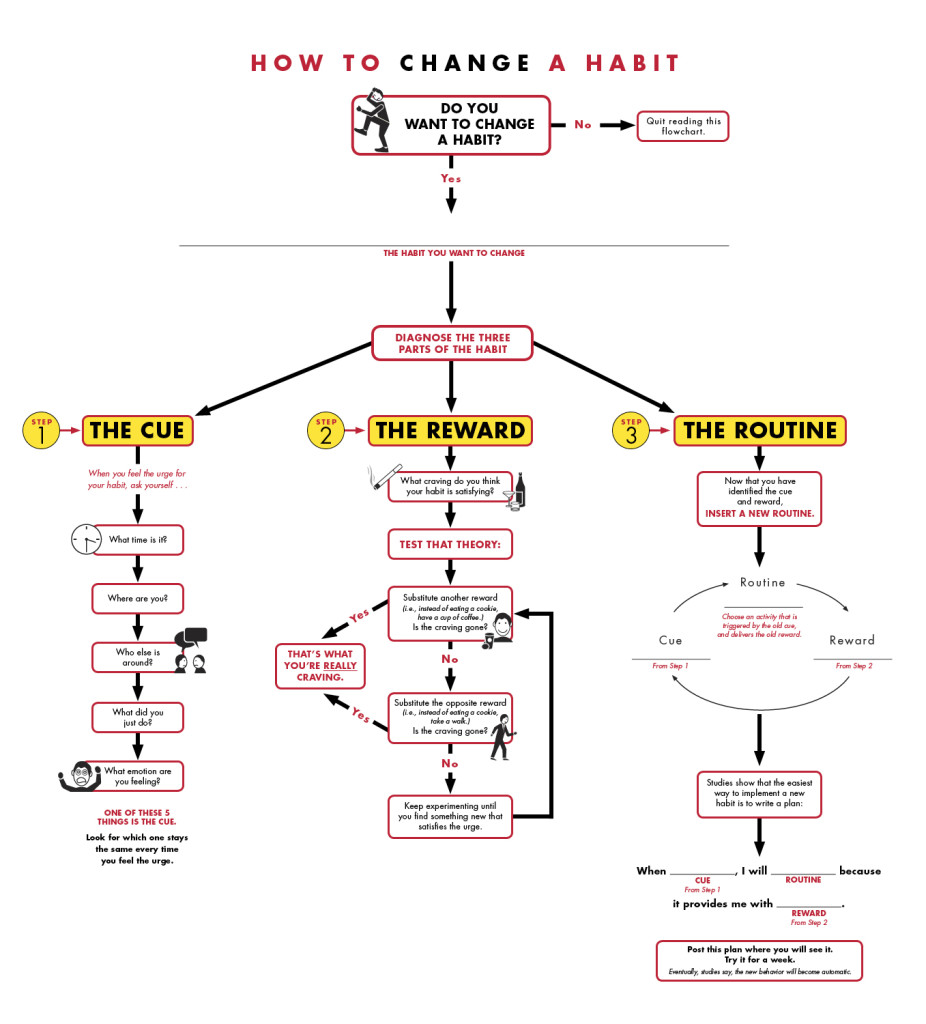 We can just right down here what our new habit will be. It might be a new study routine or an exercise routine and let’s begin with the cue.

Step 1: Every habit has a trigger, the cue.

This is what some of the cues are:

You don’t need all of these to create a habit, only one of them is needed to become a cue. The more of these cues you test out, the faster the habit takes hold.

Now this is really going to be the big thing because if you’re engaging in a routine which is No. 3, the brain would want to know if the reward’s worth doing this routine.

What reward will you give yourself at the end of the behaviour?
As I said, for me was really mostly about how the rest of my day would unfold and how I’d feel about it.

Do you actually enjoy this reward?
If it’s a yes, after a few days ask yourself…

Do you crave this reward when you’re exposed to the cue?

In other words, when it’s that certain time or environment, are you looking forward to the reward that’s coming with the behaviour – whether it’s exercise or study routine?

Look here over at No. 3, the routine. Now we want to put it all together. In this diagram, routine, this is the new behaviour that you want to become a habit. And cue, this is from step 1.

What’s the time of day?

Where will you be?

Who will be around?

Will you be listening to music?

The other thing I wanted to mention was when I go for my exercise, I’m listening to podcasts and things that fill my mind with really cool positive things. Here now, I’m exercising which is obviously good for my body, but I’m also exercising my mind.

Once we’ve got the cue in place, we want to have a look at the reward and make sure that we have a really good reward. It might be extrinsic like a little treat, a movie, or some time-off to relax. The reward ultimately will need to be how it makes you feel.

Studies show that the easiest way to implement a new habit is
to write a plan.

Let’s get right down to the bottom here and we want to complete this.
When and here we want to include the cue…

Whatever the case may be, we want to get this answer here from the answers we came up with in step 1 when we looked at the cue and the trigger.

I will describe the routine because it provides me with and then outline the reward.

You want to make sure you post this plan where you’ll see it and try it for a week.

Studies say the new behaviour will become automatic and you’ve now programmed a really cool positive habit. This means, you don’t have to rely on how you feel to get things done that don’t make you feel that great because now it’s a habit and it’s automatic.