Connecting is getting into the pit with someone.

It includes acknowledging, validating, and normalising another person’s experience. Connection is the place where transformation happens because the person feels less alone. They feel that you get them. The emotional consequences of this feeling are that the person trusts you, feels safer, and begins to calm down. These emotional consequences provide space for new thinking and new awareness – a place for positive change to arise.

In that space of connection, the person speaking does not need to defend, justify, or explain because the person you’re talking to (who is listening) gets it.

In Brené Brown’s brief video titled “Empathy versus Sympathy”, she doesn’t use the phrase “getting in the pit”, but I think that’s what she’s talking about. I want to share her work with you because Brené Brown is a remarkable thought leader, and there are some really wonderful distinctions in this video. According to Brown, the difference between empathy and sympathy is that empathy fuels connection, while sympathy drives disconnection.

Theresa Wiseman is a nursing scholar who studied very diverse professions in which empathy is relevant, and from her studies, she came up with the following four qualities of empathy:

Empathy is a choice, and it’s a vulnerable choice, because in order to connect with you, I have to connect with something in myself that knows that feeling. An empathetic response rarely, if ever, begins with “at least”. Yeah, you know, that thing we all say all too often because – you know what? – someone just shared something with us that’s incredibly painful and we’re trying to silver-line it (I don’t think that’s a verb, but I’m using it as one).

Response: “At least you know you can get pregnant.”

Response: “At least you have a marriage.”

Response: “At least Sarah is an A student.”

Too often, when faced with very difficult conversations, we try to make things better rather than simply recognizing and acknowledging them for what they are. If I share something with you that’s very difficult, I’d rather you say, “I don’t even know what to say right now, I’m just so glad you told me.” The truth is that “fix it” response rarely makes something better. What makes something better is connection. This is one of the key takeaways from Brown’s video.

Listening with attention and presence

Instead of trying to fix a problem, we need to connect with the person. We need to listen. When I talk about listening and reflective listening or active listening, I’m talking about listening with your heart, with your body. We need to have our entire focus and attention on the person to whom we’re listening. If you’re not present when you’re listening to someone, if you’ve got your own stories going on in your head (“What will I say?” “How am I going to help?”), if you’re thinking about other things, it doesn’t matter what you think you’re showing in your body, the person you’re supposed to be listening to will pick up on your lack of attention.

Listening, the art of listening, is about being fully attentive to the other person – with your mind, with your heart, with your body. Every part of your being needs to be completely there. The following quote from John Powell speaks to this:

“In true listening, we reach behind the words, we see through them to find the person who is being revealed. Listening is a search to find the treasure of the true person, as revealed verbally and non-verbally.”

I think this is a critical point. I often hear things like “But they’re just not opening up”, and I have to remind people that non-verbal communication is a much greater part of communication than verbal communication. Powell says, “Be sure to pick up what the person is saying and not saying through their body language. There’s a semantic problem, of course, ” he says. “The words bear a different connotation for you than they do for me. Consequently, I can never tell you what you’ve said, but only what I’ve heard. I’ll have to rephrase what you’ve said, and check it out with you to make sure what left your mind and heart arrived in my mind and heart intact without distortion.”

I really love this description of listening from Powell, particularly how he describes distortions between sender and receiver. Because of these distortions, it’s important that I check and rephrase what you’ve said to make sure that our communication is clear – I have to connect with you.

The 3 components to listening and responding

As I understand it, there are three core things that Powell is talking about that we need to do when we’re listening well, and it’s not a linear process. As long as these three components are part of your listening process, I think you’re doing a good job. 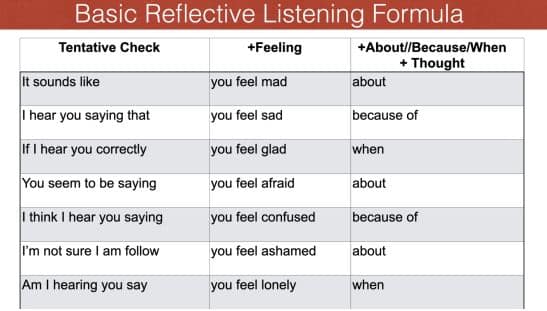 Remember, these aren’t linear. They don’t necessarily happen in that order. You can mix and match as each individual situation calls for.

Let me give you an example. A mother says, “When my daughter stops talking to me, then I know for sure that I’ve done something wrong. She doesn’t seem to be able to communicate with me anymore. Then I think that well, maybe it’s me.”

I repeat: it’s not linear.

The most important thing in this instance is to check that we’re accurately picking up on her emotional state.

So, look at her statement again and write down what you think about her emotional state. When we use this example in live workshops, people respond with a range of emotions, and they’re all true. Some say that she’s sad, and, of course, a mother would be sad in this situation. She’d be sad, worried, frustrated – all of those emotions are certainly there. However, we need to be able to reflect back the strongest emotion, the one she most identifies with. Think about it. Wouldn’t it sound odd if we responded to her by saying, “It sounds like you’re feeling worried, anxious, frustrated.” Which one is it? What needs to be addressed?

I think that the strongest emotion is guilt or doubt. If you reread what she said, notice the recurring theme.

She’s doubting herself, blaming herself, and feeling guilty that she’s doing something wrong. I think that’s the strongest emotion because she repeats it. Moreover, when she says, “I know for sure that I’ve done something wrong”, that’s a pretty direct and strong statement.

The trap here is that we might feel inclined to respond by saying, “Well, you’re doing the best you can” or “It’s not your fault”. That’s exactly how most people would respond to her statement because they want to reassure her and make her feel better. However, if we do that, we’re not hearing or listening to what she is saying. There are certainly some really strong statements here (i.e., “I know for sure that I’ve done something wrong” and I think that maybe it’s me”), and you might be thinking “but shouldn’t I challenge some of these thoughts and perceptions”? Absolutely, yes, but not yet. Remember that there are three stages in The Accidental Counsellor model, and influence is stage three. We’re not there yet. After we connect, we can start asking questions that can get her to think about the situation differently.

We need to connect first. So, how do we do that according to the three-part formula based on Powell’s quote? After identifying that her strongest emotion is guilt or doubt, I would respond as follows:

“The way you and your daughter are communicating is really upsetting you, and if I’m hearing you right, if I’m understanding where you’re coming from, it sounds like you’re blaming yourself or you’re doubting that you’re doing it right. I just wanted to check and make sure, am I hearing your right? Is that what it’s like for you?”

Notice that I actually have touched on emotion. I’ve checked more than once, including checking that I heard the content accurately. It doesn’t have to be in any order.

Of course, this is just one example of how you might respond and get in the pit by acknowledging, validating, and normalizing someone’s experience. Once she says, “Yeah, I am blaming myself”, then you can go on with the conversation from there, but you’ve got to get that first yes. If you don’t get that, nothing can come next. That’s the basic premise.

Module 1 What is an Accidental Counsellor?

Excellent practical strategies to use with a variety of steps and structures were presented at the Conscious Classroom Management Training workshop. The preventative strategies and what to say “communication script” were most useful.

I would like to take a moment to tell you what a great experience I had at your workshop. I have been a teacher for 19 years and have participated in sessions such as BoysTalk, and completed units on Interpersonal Relationships at Uni. I found your workshop to be informative, challenging (in a good way), and most importantly it contained skills that are immediately useful. I found myself using some of the techniques covered in the following week with great success.

When I got to work on Monday I immediately recommended you to the schools’ Executive Leaders as something to be considered for our staff PD. Whilst it may not suit everyone (as not everyone is comfortable being a counsellor), your workshop would be an invaluable experience for anyone interested in developing their skills as a counsellor, either as a career pathway or as an ‘accidental’ counsellor.